As the decade began, our members were enjoying their new building, especially the Kilowatt Restaurant housed inside the building. The Kilowatt became an institution among the Seattle Trade Unionists, and particularly to our own members. Many Union issues got resolved over a couple of drinks; ok, sometimes more than a couple. The Kilowatt was closed in the 80’s and was missed by the entire Seattle Labor Movement.

In 1950, the Local sent ten delegates to the 24th International Convention in Miami, Florida:

At this convention the Constitution was changed to hold Conventions every four years. Our membership stood at 2,066.

The first mention of the Washington State Ferries hiring Local 46 Marine Wiremen was made at this time. The State of Washington took over the private ferry system, Black Ball, due to public pressure and the lack of accountability of the system.

The Northgate Mall (below) opened this year in North Seattle, one of the first in the nation. In the reports it was clear that we were doing work in various parts of the state.

In Wenatchee, we were working at the ALCOA plant. We were also working on what must have been a radio station for Voice of America in Port Angeles, which was later canceled while under construction.

There was mention of work on the Skagit River at the City Light dams with 80 wiremen working and some work reports from Anchorage, Alaska.

In June 1951, it was reported that 168 men had been dispatched to the Alaska unit from Seattle. Only 19 Wiremen were out of work and membership stood at 2,148. There was ongoing problems with Boeing electricians doing construction work and charges were filed with the NLRB over this issue.

In 1953, at the meetings there was talk of the newly established Health and Welfare (H&W) plan. A joint committee of Local 46 and Contractors was set up to discuss the plan.

In September a CIR (Council of Industrial Relations) decision gave the wiremen a wage of $2.92½ and a H&W contribution of $0.07½. CIR is a system of binding arbitration conducted jointly by the IBEW and NECA.

Around this time when the work Local 46 started in Alaska was completed, the jurisdiction was relinquished to the Local in Alaska and Local 46 no longer dispatched to the far North; though over the years many members have trekked north to find work.

The Local still had plenty of social activities going on with parties and dances, as well as the joint picnics with Local 77, which continued throughout the 50’s. During these years when work was plentiful and Seattle seems to be on autopilot, the Wire Agreement had more language included into it that is still in effect today, such as tunnel and height pay.

In 1954, Local 46 sent ten delegates to the 25th International Convention in Chicago, Illinois.

At the October 13, 1954 meeting, the Business Manager made a report on a project going on in Redmond: a Nike Missile site.

It may seem inconceivable today, but with Boeing, the shipyards, and especially the Navy Yard in Bremerton, Seattle was ringed by missile sites in Redmond, Vashon Island, Kingston and many other locations. These missile sites survived until the mid ‘70s.

Between 1956 and 1958 there was much discussion at meetings about Right to Work Initiatives. These Initiatives were soundly defeated by the people of Washington. Right to Work was a fancy sounding way of weakening and destroying workers’ bargaining power.

At this time, the Local resigns from the Chamber of Commerce; no reason was given, but one can assume that two Right to Work Initiatives in two years took its toll on any relationship we may have had with business. Members also sent a resolution to the International Convention to remove the “No Strike” clause from the International Constitution.

Below are some logo designs from 1956.

In 1959, the By-Laws were changed to include the classification of Construction Stockman.

There was discussion about how the Local could get out from under the CIR clause (binding arbitration) in the Wireman Agreement. Even back then, members were thinking about being independent from the CIR.

Today, we do not have to deal with CIR unless NECA and Local 46 jointly agree. So, during negotiations, after the correct procedures, we can strike or take other action agreed to by the membership.

As the decade of the 50’s came to a close, the latest and greatest hard hat was a plastic one which could take 25,000 volts; much better than the aluminum version, which had been the norm up until then.

The local work picture was still good, though there was rumblings about the upcoming World’s Fair and who was going to be in charge of the Century 21 Exposition, as it was called. Would the work go to Union Contractors? Read on!

In 1950, the Seattle population had increased to 467,591 - an increase of one hundred thousand people. Local 46 was growing once again and work was plentiful. During this period new Units were formed if they hadn’t been already. We had the Motor Shop, Radio & TV, Neon or Sign unit, Oil Burner, Marine, and Wireman units. We also had units in Port Angeles and Alaska.

The 1950’s was the beginning of air travel with Boeing’s 707 passenger jet, and with the growing popularity of TV and home appliances, these were going to have a big effect on Local 46 and its members. Organizing was taking place in the TV repair shops and the appliance service sector. We represented Hotpoint, Sears Cold Spot service, and many TV service centers like RCA. With Boeing beginning to build commercial airliners, work was plentiful on Boeing properties.

At the September 27, 1950 meeting there was a report about the Green Lake Aqua Theatre being built and wiremen working on the project. The Theatre was built for the Seafair Summer Festival in order to house an attraction called the ‘Aqua Follies’. In perhaps a surprising action, it was motioned and carried “to organize a social meeting of members and contractors to increase and further friendly relations between the two”. There was no further discussion about this meeting.

On November 8, it was reported that a member had been fired from a fixture shop in town. The fired Brother explained the situation at the meeting and the members, in typical Local 46 fashion, voted to send the fired member back to the shop and have him appointed Shop Steward.

On April 11, 1951, a telegram was read at the General Meeting from the International President placing the Local into International supervision and replacing the officers of the Local. Though there was no reason given in the minutes for this action, some say there was quarreling within the Local, but it was not clear why from the minutes. The Local operated with an International Representative in charge until July 1952 when elections were held.

On July 9, 1952, the new officers were sworn in and the Local was finished with International supervision.

Salary increase: 39-61; Pension Plan: 38-62. Is this member payback for putting the Local under supervision; just a thought.

In October of 1953, the Jury Duty Fund was established. In the minutes, as well as the International Journal, there was an interesting resolution and discussion about a citizen’s duty to serve on juries and how it was important that working people had an opportunity to serve because, normally, juries were made up of managers and business people who sometimes did not give working people a fair shake.

At this same meeting, it was motioned and carried that, “Local 46 goes on record informing Senators and Congressmen that we do not want any tampering with the Social Security Law.” It was amended to include, “unless such change was for the betterment of the present law such as increased pension payment and a lower retirement age”. [NOTE: And we are still having issues with the government trying to steal our money that is banked in the Social Security Fund. c2015. Please remember, that money is YOUR money that YOU are banking out of YOUR paycheck. It is NOT the governments. It would be as if the government decided to take all the money out of your bank account, or take away your paid for house . . ]

During the mid-50’s the Local had a very active Education Committee. The Committee organized speakers and had movies on meeting nights. From reading the minutes, it seemed their efforts were well received.

But in 1956, the Committee was disbanded and at the meeting it was reported at turned into a donnybrook with the President taking the floor and stating that the Committee was formed for the direction of new members (there must have been red baiting going on) and the Committee was not discharged for communistic activities.

The members at the meeting were not happy with this outcome and voted to reinstate the Committee.

The 1958 International Convention was held in Cleveland, Ohio.

The membership continued to grow slowly to 2,399. The following delegates were elected to represent Local 46. 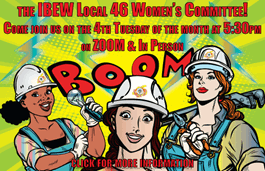 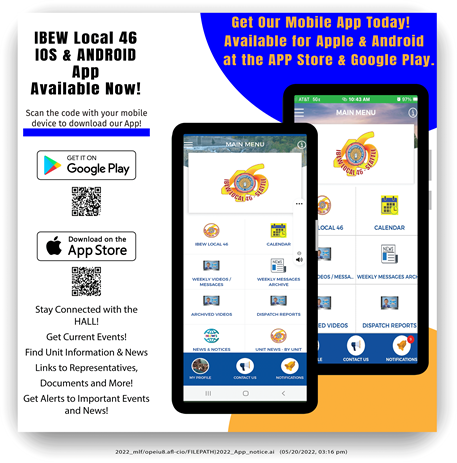